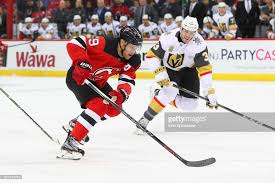 March 4, 2018 marked the first ever game between the Vegas Golden Knights and the New Jersey Devils. The Golden Knights have been one of the surprises of the 2017-18 NHL season and tonight they continued their winning ways, defeating the Devils at Prudential Center 3-2.

Once again, Taylor Hall was the story for the Devils. He extended his personal point scoring streak to 18 straight games and 25 straight appearances with an assist on the Devils first goal and then scoring a goal of his own later in the game.

The Devils made some roster changes from the last few games with Drew Stafford slotting back in at forward and Jesper Bratt, who had been struggling of late, watching from the press box as a healthy scratch. Jimmy Hayes and Mirco Mueller also joined him. With that, the defense was the same as the last few games and, according to Chris Ryan of NJ.com and the Star-Ledger, coach John Hynes made the decision to sit Bratt in favor of Stafford at game time.

Cory Schnedier was back between the pipes, making 24 saves on 27 Vegas shots. For the Golden Knights, it was former Pittsburgh Penguin Marc-Andre Fleury – who made 33 saves on 35 shots faced.

All of the scoring happened in the second period leading up to a wild finish as the Devils dropped their third straight.

David Perron got the Golden Knights on the board first when he scored at 4:39 of the second from Tomas Hyka and former-Devil defenseman Jon Merrill. It was only Merrill’s third point of the season, so you know he was ready to go against his former team. Perron’s goal made it 1-0 Vegas.

The Devils would only need four minutes and five seconds and a power play to tie things up. At the 7:31 mark, Jonathan Marchessault was called for interference and the Devils were on the man advantage. It was here where Sami Vatanen stepped up. He scored at 8:44 from Hall and Patrick Maroon. The goal began with Maroon and Travis Zajac with some terrific board work in the far corner. Maroon won the puck battle and passed to Hall waiting at the far faceoff dot. He slid it over to Vatanen at the top of the near circle who unleashed a one-timer to beat Fleury. That tied things up at one and extended Hall’s point scoring streak.

It would remain that way until Vegas retook the lead at 11:17 of the second off of a goal from Deryk Engelland. He got assists from Shea Theodore and Ryan Reaves. That made it 2-1.

The Golden Knights would extend their lead to 3-1 at 17:43 of the second when newly-acquired Tomas Tatar scored from Perron and Brad Hunt. That goal came on a power play set up when New Jersey was called for a too many men on the ice bench minor at 17:33. Overall, on the night the Devils were 1-for-3 on the power play with four shots. The Golden Knights were 1-for-2 with five shots, as they really clicked at a good pace.

But the Devils were not out of things as long as Taylor Hall was around. He would score his 30th goal of the year, unassisted at 17:55 of the second to make it 3-2. That one came when Hall grabbed the puck from a Vegas player trying to clear it behind his own net. Hall, relentless on the forecheck, came away with it and stuffed a wraparound through Fleury’s five hole to cut the Golden Knights’ lead to one.

With a packed Prudential Center crowd chanting “M-V-P,” Hall had gotten the Devils within striking distance.

But the closest they would come came extemely late in the game. Like three seconds remaining late. With the Devils pressing and trying to frantically get things tied up with Cory Schneider pulled and a 6-on-5 advantage, Vegas’ Brayden McNabb was called for delay of game for clearing the puck over the glass at the 19:56 mark of the third period. The Devils, with Cory still pulled, would have a 6-on-4 advantage for just over three seconds. All they had to do to make it possible was win the draw, which they did, but they were unable to find the back of the net. That resulted in a 3-2 Golden Knights win.

The Devils had won 46-percent of the game’s faceoffs and, stats-wise, Vatanen led the team in ice time with 23:51. Hall led all Devils forwards with 20:05. Vatanen played 2:17 on the power play and 34 seconds on the penalty kill. Hall led all shooters on both teams with seven shots, Blake Coleman led in hits with five, Zajac led in blocks with two and Stefan Noesen led in takeaways with two.

The Devils will get another crack at the Golden Knights in Las Vegas next week when they go on their western road swing. But next up, they welcome the struggling Montreal Canadiens to The Rock on Tuesday. Maybe this is what they need, a weaker opponent to get back in the winning column. They have been and will be playing a lot of teams in playoff contention over the next month, including the two meetings with Vegas. We will see you on Tuesday.

Note: the photo of Taylor Hall at the top of this post is copyright Getty Images.