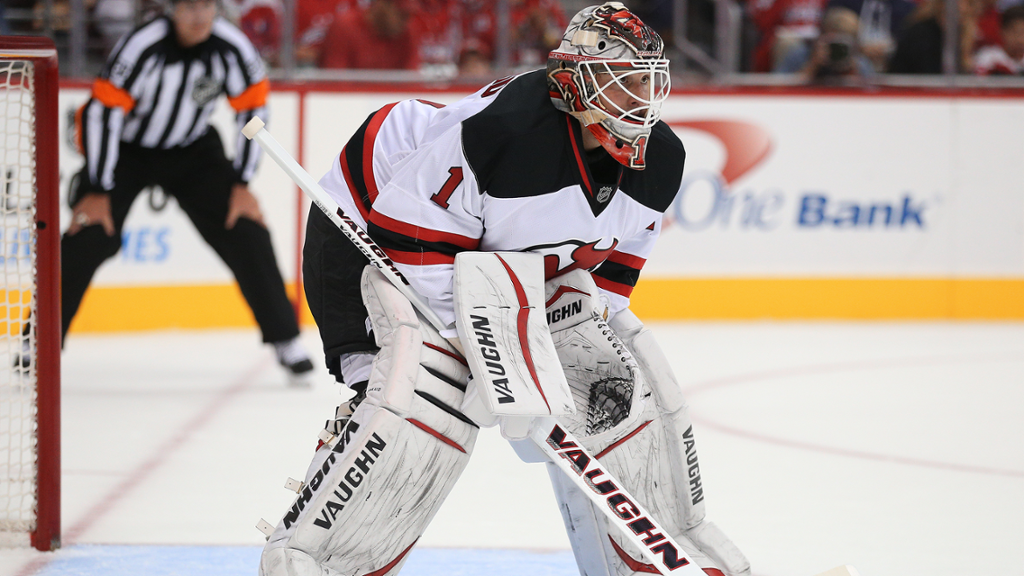 The Devils set off on the road trip to end all road trips tonight as they played the Nashville Predators at Bridgestone Arena. They were kicking things off with the Central Division leaders and would, by the time they got back to Prudential Center on March 24, have faced three of the four division leaders in the NHL. That first home game back is against the Atlantic Division leading Tampa Bay Lightning, by the way.

This road trip is also make or break for the Devils’ season, as they are hanging on to a playoff spot by the skin of their teeth. Florida beat the Rangers in a shootout tonight, moving them within a point of the second wild card spot, which the Devils occupy now because Columbus moved ahead of them yesterday into the first wild card spot.

So this was the beginning of a couple of must-wins for the Devils. And what did they do? They won, 3-2 in a shootout over a Nashville team that has not lost since February 17.

The Devils would play tonight’s game without both Pavel Zacha and Travis Zajac. The two centers are day-to-day with upper body injuries. With that, Drew Stafford slotted back in at forward and Brian Gibbons moved over to center to fill a void there. He played on a line with Michael Grabner and Kyle Palmieri. According to Deb Placey on MSG, Zacha and Zajac could rejoin the team as they head out west, although she did not specify when exactly that would be. Mirco Mueller and Jimmy Hayes were the healthy scratches.

It was Hockey Fights Cancer Night in Nashville as Brian Boyle took the ceremonial faceoff for the Devils. The puck was dropped by a young cancer patient.

There was a playoff-like atmosphere in Nashville as the crowd was just hot and loud all night. And the Preds gave them a lot to cheer early. Mattias Ekholm scored unassisted at just 1:17 into the game. The Devils were on their heels early and it resulted in Ekholm’s goal, just like that it was 1-0 Nashville.

It would take the Devils until the 7:13 mark of the first, but Sami Vatanen would see to it that the game got knotted at one. He scored from Miles Wood and Will Butcher and the goal came when Wood skated up the right wing and chipped the puck by the Nashville defender. He got to it in the far corner and got it to Vatanen at the far point. Vatanen fired and the puck found twine cleanly making it 1-1. For Wood, the primary assist was his first point since February 22 (against Minnesota).

The Devils got a break with 19:43 left in the first period when the Predators received a bench minor for too many men on the ice. The power play would be primarily played on fresh ice at the beginning of the second period. They would not score on it technically, but Brian Boyle would make it 2-1 Devils just as the penalty was expiring. It came at 11:24 of the second and Damon Severson and Patrick Maroon assisted on it. The goal occurred when Stefan Noesen chipped the puck deep into the Nashville zone. It went around the boards to Maroon, who went low-to-high to Severson at the point. Severson shot and Boyle, camped out in front of Saros, tipped it by him.

The goal would be reviewed by Toronto for a potential high-stick, but replays showed that it was played below the crossbar. It was a good goal and it was 2-1 Devils.

And that is where we would hang on as Kinkaid made some great saves to keep New Jersey in it. Blocked shots were also key and the Devils threw themselves into keeping the puck out of the back of their net.

They almost succeeded too, clinging to their 2-1 lead. But, with 2:09 remaining in the game, Saros was pulled by Nashville coach Peter Laviolette. With the extra skater on, Ryan Johansen scored his eleventh of the year from Ryan Ellis and Roman Josi. Just like that, the lead evaporated and it was 2-2. After a frantic ending, we were headed to overtime.

OT was pure end-to-end, back-and-forth hockey. The Devils seemed doomed when, with a little less than two minutes remaining in the extra session, Grabner was called for tripping Viktor Arvidsson. But with a couple of spectacular saves from Kinkaid, some good penalty killing by Ben Lovejoy and a timely blocked shot by Boyle, the Devils weathered the storm and got to a shootout.

On the power play, both teams were 0-for-3 on the night. The Devils ended with four shots with the extra man while the Predators had four as well.

With at least a point secured, the Devils were looking for the full monty in the shootout. Kyle Palmieri went first for New Jersey, but Saros stopped him. Ellis missed for Nashville, Jesper Bratt missed fot the Devils as well. Kevin Fiala missed for the Preds and Drew Stafford was stopped by Saros. Kinkaid stopped Filip Forsberg to get the shootout to a fourth round. There, Taylor Hall converted for the Devils. Kyle Turris responded with a goal to keep the Predators alive. Finally, Boyle ended things when he beat Saros in the bottom of the fifth round. Kinkaid made one final save and the Devils came away with the two point victory.

On the stat sheet, Vatanen led the Devils in ice time with 26:52 (including 3:48 on the power play and 2:14 on the penalty kill). Taylor Hall led the forwards with 22:19 total and 3:45 on the power play and 21 seconds on the PK. Noesen led in shots with four, Blake Coleman led in hits with three, Ben Lovejoy led in blocks with four and Drew Stafford led in takeaways with two. The Devils won a solid 49-percent of the faceoffs, including some key ones in the OT and on penalty kills.

Next up, the Devils make their first ever trip to Las Vegas as they take on the Vegas Golden Knights on Wednesday – yes, they have three days off in between games. New Jersey will try to take revenge on the Pacific Division leaders for the loss at The Rock earlier this month. The team will then jet off to California. A couple of big victories (and these would all be big) would go a long way in keeping the Devils’ playoff hopes alive. We will see you Wednesday.

Note: The photo of Keith Kinkaid at the top of this post is copyright New Jersey Devils, downloaded from NewJerseyDevils.com.