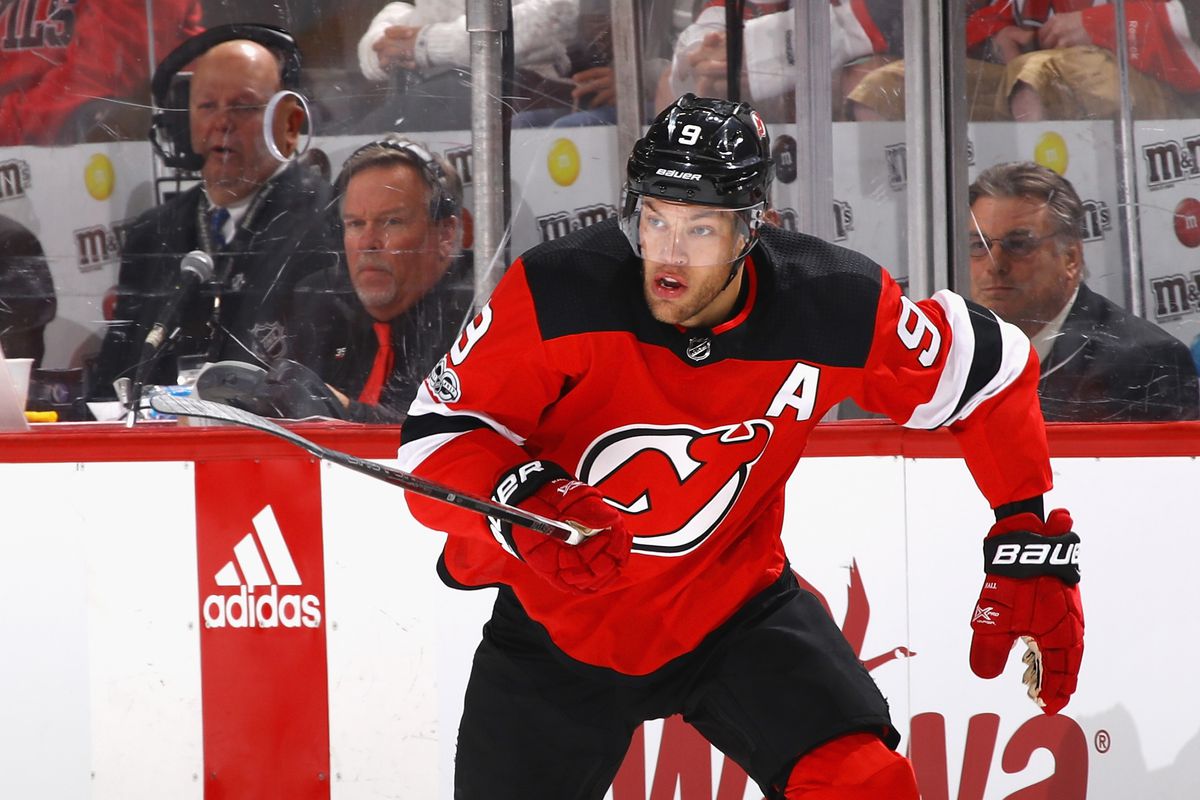 Following defeat in Florida last night, the Devils knew they needed a good showing in Carolina against the Hurricanes to build some cushion between them and the second Eastern Conference wildcard. Unfortunately, they would not get it, falling 3-1 to the Canes tonight.

The good news? From an individual standpoint, Taylor Hall continued his torrid pace. He scored a power play goal, the Devils’ only goal of the evening to move his point streak to 17 straight games and 24 overall.

While the Devils were being knocked off in Sunrise last night, the Canes were also playing in Philly. They managed to defeat the Flyers, becoming the only Metro Division team to win last night. The Hurricanes, much like the Panthers last night, are a hot team gunning for a spot in the playoffs – a place both teams have not been in a long time.

In some roster moves, Eddie Lack was reassigned to Binghamton of the AHL when Cory Schneider was activated off of injured reserve. Although Cory was available, the Devils went with Keith Kinkaid tonight, giving Cory a lighter workload and letting Kinkaid go against a team that he had a 6-1 lifetime record against in the Hurricanes.

Kinkaid would make 27 saves on 29 shots against. With an empty net late in the game, Carolina ended up with 30 total shots. Kinkaid was making his 13th appearance in the last 17 games and his 100th career appearance for the Devils. Facing him was the Canes’ old workhorse Cam Ward. Ward made 25 saves on 26 shots total.

Other than the goaltender, nothing about the lineup changed. Jimmy Hayes, Mirco Mueller and Drew Stafford remained the healthy scratches for New Jersey. In other another milestone, John Moore was playing in his 200th game as a Devil tonight.

The Devils were playing in the second half of their 13th back-to-back game tonight and making their final trip to Carolina this year (although the teams will play each other one final time at The Rock at the end of this month).

Following a scoreless first period, Derek Ryan scored at 11:50 of the second to give Carolina a 1-0 lead. Ryan’s goal, which went in off of Damon Severson’s skate inadvertently, snapped a 15 game goal scoring drought for him. It also rewarded a Carolina team that had played very well through the first period to that point in the second.

And that was the theme of the early part of the game. The Canes dictated the pace and thoroughly outplayed the Devils, with only Kinkaid keeping New Jersey in the game at that point.

But the Devils had an ace up their sleeve. No matter how poor they seem to be playing, they always have Taylor Hall. He once again put the team on his back and tried to will them single-handedly to get back into the game.

He would score to extend his streak and it was a real nice one too. It came with 33 seconds remaining in the second period on the power play (Ryan had gone off for holding with a minute left in the period) and he got assists from Sami Vatanen and Kyle Palmieri. The goal developed when Palmieri wound the puck around the boards to Vatanen at the far point. Vatanen shot and Hall tipped the puck by Ward. He was able to tip the puck through his legs and by the Carolina goaltender in what was a pretty play.

The Devils would finish the night 1-for-3 on the power play with three shots, marking the second consecutive night that they had scored on the man advantage. Carolina was 0-for-1 with one shot on goal.

But, as Travis Zajac would say in a postgame interview broadcast on MSG, the team could not just rely on Hall to will them to victory. While Keith Kinkaid did his part, he made some phenomenal saves throughout the final two periods, the Devils could do no more in front of him.

Teuvo Teravainen scored the game winner at 9:37 of the third period from Brett Pesce and Elias Lindholm to give the Canes a 2-1 lead. It was another deflection, as Teravainen tipped Pesce’s shot by Kinkaid.

Kinkaid would be pulled with just over two minutes left to go in the game to try and get things tied up for the Devils. This was something that had nearly happened prior to getting the extra attacker on when Zajac’s rolling puck late in the third hit the post.

Unfortunately for the Devils, the magic of last night – when Jesper Bratt scored with Schneider on the bench – could not be repeated. Justin Williams scored into the vacant Devils’ net from Jordan Staal at 19:38 of the third period to make the final score 3-1.

On the scoresheet, Vatanen led in ice time with 23:04, outpacing his closest teammate by about 2:15 or so. For Vatanen, 2:42 came on the power play while 1:03 was on the penalty kill, so he continues to play in all situations. Palmieri and Vatanen led in shots on goal with five each, Pavel Zacha and Patrick Maroon tied for the lead in hits with five apiece. Ben Lovejoy led by a wide margin in blocked shots with five and Hall led in takeaways with four. The Devils won only 40-percent of their faceoffs, no surprise as Carolina is one of the best faceoff teams in the NHL.

So, Taylor Hall’s streak remains intact, but you get the feeling after every loss when he does postgame interviews that the two points in the standings would mean a lot more to him than individual points. Next up, the Devils will try to right the ship against another team having a surprisingly good season – the expansion Vegas Golden Knights.

This will be the first ever meeting between the two teams and will take place at Prudential Center on Sunday at 5 PM. I will be attending this game in person so my post will be a little bit late in getting up. Hopefully the Devils can get the W in their first ever game against Vegas’ NHL entry. See you on Sunday.

If you enjoyed this post, please do not hesitate to follow us on Twitter @LGDevilsNet or email us at LetsGoDevilsNet@gmail.com. You can also leave a comment at the bottom of this article if you choose.

Note: the image at the top of this post is copyright Bruce Bennett/Getty Images.