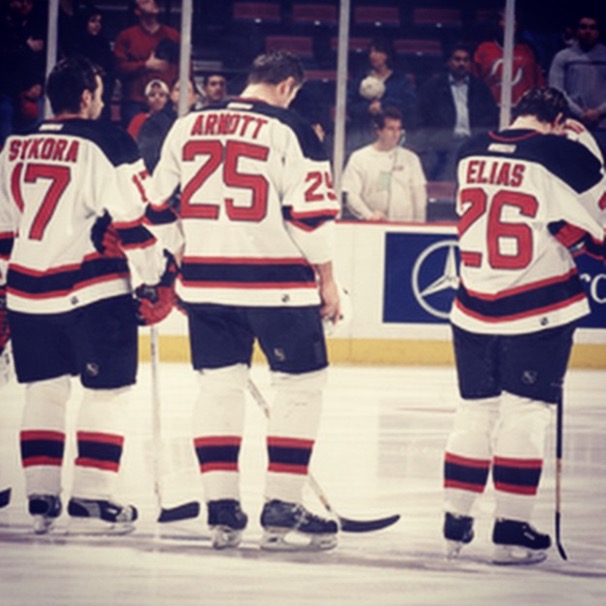 Earlier this evening, the Devils held a question and answer session along with the reunion of the fabled A-Line of Petr Sykora, Jason Arnott and Patrik Elias ahead of Elias’ jersey retirement on Saturday. I was fortunate enough to attend and see three of the greatest line combos in Devils history reunite.

The three entered to a rousing ovation from the crowd of a few hundred or so season ticket holders and people who bought tickets specifically for this event. Emcee and Devils radio play-by-play man Matt Loughlin asked the three men some questions before turning the floor over to fans.

Covered by Loughlin were topics like “what are you doing in retirement.” All three said that they are busy being dads. They miss a lot of their kids milestones early on while they are still playing, but now they get to be there for them due to the nature of being able to retire at a relatively young age. Sykora’s family has even moved back to New Jersey due to his son’s youth hockey career. He felt that the quality of youth hockey was pretty good in New Jersey and admitted he did not want to move to Minnesota or Canada.

To that, Arnott (who is Canadian) immediately quipped “what’s wrong with Canada?” The comeraderie and friendship that these men shared was very evident. They were more than just linemates on a hockey team, they were pals away from the rink.

Later in the question and answer period from fans, one question came regarding who was the best player they ever played with besides each other. Sykora joked that he played on a line in Anaheim with Paul Kariya and that Kariya may have said hello to him twice during their entire time together.

The amazing thing is that Sykora and Elias’ chemistry made sense. After all, they were countrymen and had played together on Czech national teams earlier in their hockey careers and, thus, were familiar with each other. But the way that they took in the Canadian Arnott was amazing and led to the three’s great chemistry.

This topic of chemistry answered one of the biggest questions from the line’s biggest goal: the Stanley Cup clincher in double OT of game six against the Dallas Stars in 2000. Arnott (who now, ironically, lives in the Dallas area) says that Patrik did see him and knew where he was passing the puck.

One of the main questions that Elias and Arnott both get from hockey fans is if Patty knew that Arnott was where he was when he passed the puck or if it was a blind pass. The two admitted that Patty had taken a look over his shoulder and had seen Arnott where he was when he hit him with the pass.

Sykora, of course, was not a part of the ensuing celebration, having been knocked out of the game with a concussion from a check earlier in the game. He was in the hospital and told a funny story about how there were two nurses attending to him. Once the goal was scored on TV, he began to cry and celebrate the Devils’ win. One nurse broke down crying because the Stars had lost and the other started crying because she was so happy for Sykora.

Arnott mentioned an interesting story about when he was first traded to the Devils from Edmonton. He was being quizzed by then-assistant coach Robbie Ftorek, who asked him to list the top offensive and defensive teams in the NHL. Arnott listed the usual late-90s offensive powerhouses: Detroit, Colorado, etc. Defensively, he said he figured the Devils were number one because they “played the trap.” Ftorek said that yes, they were first defensively, but that they were also number one offensively.

It just went to show that the Devils teams of that era, while very stingy defensively, were not quite as “boring” as the media in certain cities would have you believe. Key to that offense going forward from there was the A-Line. To paraphrase Arnott, if being boring was the sacrifice they had to make to win Stanley Cups, then sign him up.

The second part of the event featured the full screening of the documentary “26: Elias.” The Devils had been releasing it in parts on social media, but this was the full documentary, which runs about a half an hour. It covered topics such as his childhood, getting drafted by the Devils in 1994, the Stanley Cup years, battling Hepatitis A and returning to play hockey when doctors were telling him he would never play again, free agency and almost signing with the Rangers and his team record-setting years.

The most fascinating part about this, I think, was the final word on what almost happened when he signed with the Rangers. Lou Lamoriello basically told him to test the free agency waters, that he was one of the best players in the league and will be making a lot of money. Money the Devils could not give him.

The bidding came down to the Los Angeles Kings and the Rangers. The Rangers, however, were unwilling to grant him a no trade clause in the new contract and talks stalled. Finally, Patty called Lou personally and Lou was now willing to give him and his agent a contract worthy of what he deserved.

Elias joked that he did not know if it was some kind of test that Lou was putting him through or what, but the deal got hammered out pretty quickly after the two talked.

Another great story from the documentary reflected on Elias not actually choosing to wear number 26. He started out with 22 and was also given 24 before the team settled on giving the rookie 26. It was the decision of an equipment manager to give him his iconic number, not Patrik’s choice.

Overall, it was a great night. All three men are class acts and it was nice to see Jason Arnott and Petr Sykora get a little bit of respect as we get set to honor Patty’s career on Saturday. Although they may not be getting their numbers put up in the Prudential Center rafters, they played a huge part in Patrik Eilas’ time in New Jersey and deserve to be recognized just as much as he is.