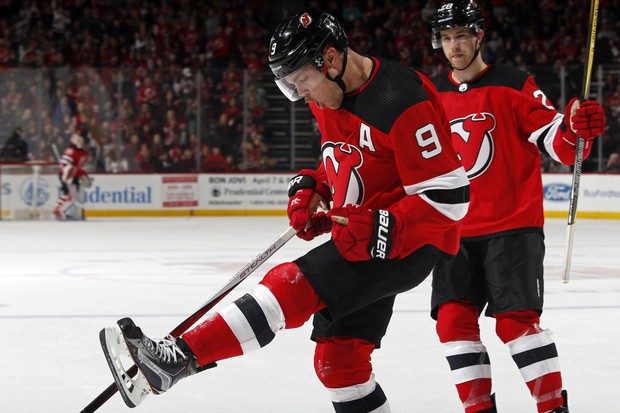 The New Jersey Devils had lost three in a row with a rough stretch of games staring them right in the face. There was this homestand where the Devils faced high-powered teams like Vegas and Winnipeg. And then there is the western road trip against Nashville, the California teams, Vegas and then ending in Pittsburgh that could make or break this season.

Coach John Hynes did not want to use the word “desperate” – saying that that sounded like the Devils were not in control – and preferred the term “urgent” instead. But simply put, the Devils needed this game tonight against a weak and depleted Montreal squad. They got the two points, defeated the Canadiens 6-4 following a late surge by the Habs.

It was a special night at The Rock as the Devils were honoring the women’s US Olympic hockey team who won gold in South Korea last month. The eleven members of the team that were there talked to young female hockey players before the game and were on the broadcast talking during the pregame and the first intermission to Deb Placey and Bryce Salvador of MSG Network. They also participated in a ceremonial puck drop between Devils captain Andy Greene and the Canadiens’ Brendan Gallagher and were there to generally promote women’s hockey. With Team USA defeating Canada for their first gold medal since 1998, the women’s game has never been stronger.

The Devils made some changes to their lineup with Jesper Bratt slotting back into the lineup (in for Drew Stafford) and back on the top line with Taylor Hall and Nico Hischier. Hynes switched up some of the lines with the second line consisting of Michael Grabner and Kyle Palmieri centered by Pavel Zacha.

The Canadiens were without the injured Max Pacioretty and Shea Weber (who will be missed for the rest of the season). They were also missing goaltender Carey Price to injury. In his place started Charlie Lindgren who stopped 27 of 33 shots faced.

For the Devils, Keith Kinkaid went as Hynes said that he wanted Cory Schneider to practice more to get some of the rust off of him. He also felt that Kinkaid deserved another start (his career high 28th appearance) in light of how he has played of late. He made 29 saves on 33 shots.

So with the Canadiens making their only trip to Jersey this year, the Devils were ready to go. It only took to the 8:25 mark of the first period for Stefan Noesen to get the Devils on the board, getting assists from Will Butcher and Travis Zajac. The goal came when Zajac won a battle along the boards in the far corner. He slid it to Butcher at the far point. Butcher fired a shot on goal that was tipped in front by Noesen to make it 1-0 Devils. As Ken Daneyko pointed out on the MSG telecast, it was all made possible by Zajac’s strong play along the boards.

Butcher’s assist on that goal would be his first point in 12 games. He had a good game and also took a puck to the face for which he would leave briefly to get repaired, but would return.

The Devils’ other Plano, Texas import, Blake Coleman, would give them their second goal at the 16:33 mark of the first off assists from Butcher and Brian Boyle. That one developed when Boyle came down the right wing and made a move to drive around the Montreal net, coming out from behind and giving the puck to Butcher at the far point. Butcher fired on net again (something Hynes said that the coaching staff had asked him to do more of) and Coleman buried the rebound to make it 2-0.

The Devils’ onslaught would continue in the first period as Zajac notched his first of two at 18:08 of the first from Palmieri and Sami Vatanen. That one came on the power play – set up when Jacob de la Rose was called for slashing. On that one, Hall stickhandled into the Habs’ zone along the near boards. He dished to Vatanen at the point. Vatanen gave to Palmieri at the top of the far faceoff circle. He fired, with Zajac tipping the puck by Lindgren with Patrick Maroon providing a screen in front. It was now 3-0 Devils.

The Devils would build up a 4-0 lead with Zajac’s second of the game. He scored with 12 seconds remaining in the first from Hall and Vatanen. This one also came on the power play, as Montreal’s Andrew Shaw had gotten a double minor for high sticking Greene and cutting him at the 19:39 mark. This one came when a faceoff was won back to Vatanen at the far point. He one-touch passed to Hall, who was set up at the other point. Hall fired on goal and Zajac cleaned up the rebound in the slot. That assist for Hall extended his personal point scoring streak to an amazing 26 games.

According to Steve Cangialosi on MSG, the last time Hall failed to register a point was December 30 at the Washington Capitals. He has scored a point in every game he has played in the 2018 calendar year. This was also the first time this season that the Devils had scored four goals in the first period of a game.

There would be some crossover penalty time into the second period, as only the first two minutes of the double minor were extinguished when New Jersey scored their second power play goal. Overall on the power play, the Devils were 3-for-5 with eight shots while the Habs were 0-for-2 with three shots on goal. The Devils power play had had some struggles, but now seems to be back on track somewhat.

The second period would see four more goals. The first came off the stick of Gallagher, who made a nice power move on Kinkaid’s net to make the score 4-1. He got assists from Jeff Petry and Paul Byron at 10:27 of the second.

The Devils would get that one back less than a minute later at 11:36 when Maroon scored his first as a Devil. He got assists from Hall and Palmieri on the power play to make it 5-1. It came when Hall won a draw back to Vatanen at the point. Vatanen faked a shot and passed to Palmieri at the near half wall. Palmieri found a nice seam to Hall at the far faceoff dot. He fired and the rebound came right to Maroon, who gobbled up the rebound and put it home to extend the Devils’ lead to four.

That was not all for the Devils’ scoring in the second, either. At 15:14, Brian Boyle scored from Coleman to make it 6-1. It came on the rush with Coleman trying to pass to a cutting Grabner in front of the net on a 2-on-1. Instead, the puck came to a trailing Boyle, who scored his first goal since prior to the All-Star break. The Devils had put up a half dozen on the Canadiens, but that was it for their offense on the night.

From there, it was the Habs who were in comeback mode. That started when de la Rose scored with 14 seconds remaining in the second period from Phillip Danault and Jordie Benn. It was 6-2 New Jersey.

In the third period, de la Rose would strike again, this time from Andrew Shaw and Mike Reilly at 14:40. The Devils’ lead was now cut in half at 6-3.

Byron Froese would score the final goal of the game at 19:01 from Daniel Carr and Reilly. On this one, the Devils did use their coach’s challenge to see if there was goaltender interference, but review showed that the Habs player was pushed into Kinkaid by the Devils’ defender which meant that the call on the ice stood: it was a good goal. It was now 6-4 Devils.

Monteal coach Claude Julien would pull Lindgren with about a minute remaining to get the extra attacker, but a well-timed clear and then some pressure from the Devils would result in a win, the 100th of John Hynes’ NHL career.

In the end, seven Devils had a multi-point night: Hall, Boyle, Zajac, Coleman, Palmieri, Butcher and Vatanen. Butcher was named the game’s third star while Hall was second and Zajac first, with two goals and an assist for three points.

Vatanen would lead the team in ice time with 23:26 total, including 3:10 on the power play and 1:24 on the penalty kill. Hall led in shots on goal with four. Boyle, Stefan Noesen and Ben Lovejoy all had three hits to lead the Devils. John Moore and Greene each had three blocks to lead in that category. Hall led in takeaways with two. The Devils won 52-percent of the game’s faceoffs.

Next up, the Winnipeg Jets come to Prudential Center on Thursday in the next stiff test for the Devils, who got points 75 and 76 tpnight. The Jets beat the Rangers tonight off a Patrik Laine hat trick. The Devils will then go on a two week road trip that will see then play some of the best teams, not only in the Western Conference, but in the entire NHL. Hopefully they can play well agaisnt Winnipeg and come away with at least a point in a crucial time in their schedule.

Note: the photo of Taylor Hall at the top of this post is copyright Adam Hunger/Getty Images.