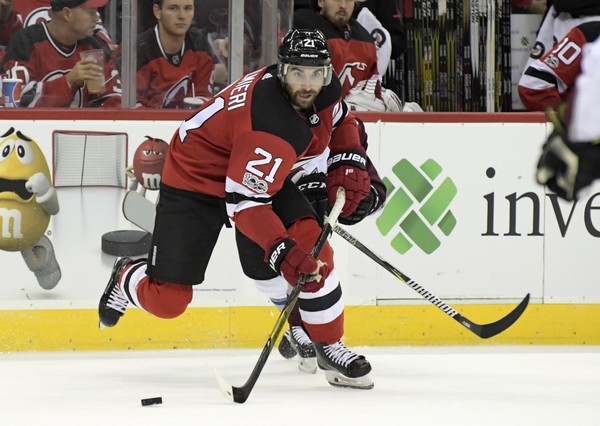 They say that all good things must come to an end. That was never more true than tonight as, for the first time since December 30, 2017, Taylor Hall failed to register a point in a game. The Devils fell to the Winnipeg Jets 3-2 at Prudential Center. The streak ends at 26 games.

It was a rough loss for New Jersey, as the Devils played the much better game but just had trouble solving Winnipeg goaltender Connor Hellebuyck. The Jets are a big, “heavy” team that plays very physical, one of the best in the Western Conference where that style of play is more prevalent. That was definitely in evidence tonight, as the bodies were flying, including Travis Zajac taking a big hit and leaving the game in the second period with an apparent injury.

Speaking of injury, Pavel Zacha was out of the lineup tonight, as he is day-to-day with an upper body injury suffered in the Montreal game. He joined Jimmy Hayes, Mirco Mueller and Drew Stafford as scratches. The Devils did get Brian Gibbons back, as he played his first game since breaking his thumb on January 20 at Philadelphia.

Winnipeg was missing, among others, Mark Scheifele and backup goalie Steve Mason. An interesting story with the Jets’ goaltending as Devils emergency goalie Zane Kalemba – a Saddle Brook, New Jersey native who went to Princeton – had to dress for them for warmups and early in the game as call-up Michael Hutchinson had some travel problems and did not arrive until mid-way through the game.

The Devils have their next six games coming against Western Conference teams that are in playoff contention. This will be a rough stretch for them and they need to get good goaltending to steal a few here and there. To that end, Cory Schneider got the start tonight, making 21 saves on 24 shots. He played well for the Devils, but, unfortunately, the Winnipeg goalie just played a little bit better.

That was, as stated, Connor Hellebuyck. He made a whopping 41 saves on 43 Devils shots. As mentioned about goalies stealing games, this was one where Hellebuyck stole one for the Jets. He was named the game’s first star.

The Devils lost to the Jets back on November 18 in Winnipeg, getting blown out. It was a much different story tonight with the same result.

Patrik Laine scored the game’s first goal and his fourth straight after scoring a natural hat trick versus the Rangers the other night. He got assists from Paul Stastny and Nikolaj Ehlers to give the Jets the early 1-0 lead. It was a broken play as the puck just kind of came to a stop in the high slot as Laine finished. The goal came at the 4:12 mark of the first. It was also the first shot of the game for Winnipeg.

The Devils would get a break at the 18:29 mark of the first when the Jets’ Josh Morrissey was assessed a double minor for high sticking Blake Coleman. The bulk of the power play would come on fresh ice in the early part of the second period. The Devils would not score and would go 0-for-4 with nine shots on goal. Winnipeg was 0-for-1 with just two shots on goal. The Devils played a clean game which is good considering the Jets’ puck control game in the offensive zone. They are relentless in their opponent’s zone and very physical on the puck.

In the second period, Joel Armia gave Winnipeg a 2-0 lead when he scored at 13:26 from Ben Chiarot and Hellebuyck. Just prior to that was when Zajac had suffered his injury, gutting out the rest of his shift, as Ken Daneyko put it, before he left the game. He would not return.

The Devils would get on the board in the second on a nice play. Nico Hischier flung a hail mary pass from the Devils’ zone to Kyle Palmieri who broke into the Winnipeg zone. He snuck behind the Jets’ defense and beat Hellebuyck glove side at 16:41 to make it 2-1 Jets. In contrast to Winnipeg scoring on their first shot on goal, it took the Devils 22 to finally beat Hellebuyck.

In the third, Ehlers would score to make it 3-1 at the 9:55 mark when Dustin Byfuglien’s shot had seemingly beaten Cory. He celebrated, but the puck had not gone in, hitting the crossbar. Ehlers would put home the rebound and the Devils were down two again.

But Hischier would give hope at 11:07, cutting the lead to 3-2 off assists from Jesper Bratt and Will Butcher. That one developed when Hall gave to a cutting Butcher just inside the Winnipeg blue line. Butcher shot and after a couple of whacks at the puck by both Bratt and Nico, Hischier was able to bat it out of the air and in. The Devils were within one.

They would need to kill off a penalty on the way to getting a shot at tying it. Patrick Maroon took a penalty for boarding Morrissey at 14:52 for the Jets’ only power play of the game. The Devils penalty kill came through and Cory was pulled for the first time with about 2:14 left in the game.

But it was not meant to be. Time simply ran out on New Jersey as the Jets got the victory. The Devils now only have one regulation win in their last 13 games against Winnipeg, a team that they do not matchup well with and who always seem to get them.

For the Devils, Sami Vatanen led every skater in the game in ice time, with 27:46, including 5:59 on the power play and 34 seconds on the PK. Palmieri, who played a really good game, led in shots with seven. Coleman led in hits with six while Palmieri, John Moore and Vatanen all led in blocks with two each. Brian Gibbons, in his return had a takeaway to lead in that category. The Devils won 51-percent of the game’s faceoffs.

Next up, their big two week road trip kicks off at Nashville on Saturday. The Predators are another good, physical and talented Western Conference team. Hopefully the Devils can rack up some points here, as both Columbus and Florida have crawled back into the wildcard race (they both won tonight). We will see you Saturday.

Note: The photo of Kyle Palmieri above this post is copyright Bill Kostroun/AP Photo.