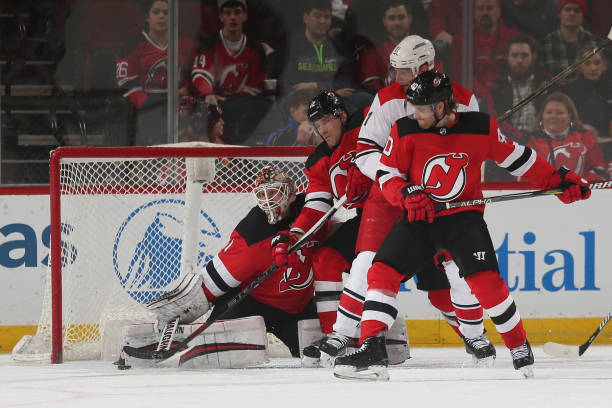 Coming off of their shootout win over Philly Tuesday, the Devils knew they were still not out of the woods yet. Coming up would be the Carolina Hurricanes, the team just below them in the Metropolitan Division standings and a team definitely on the rise. They would also be facing the Canes four times between tonight and March 27, meaning that these were some very important divisional games on the way. It is not a stretch to say that these games with the Hurricanes could very well determine the playoff picture in the Metro Division.

In the end, the Devils took the first meeting between the two teams this season – Carolina was the last Metro (in fact the last Eastern Conference) team the Devils had not faced this year – 5-2.

The Devils have been making some news with their fashion lately. Coach John Hynes had t-shirts made up for the players with the slogan “New Jersey vs. Everybody” on the front and “Devils vs. the World” on back. This was to show that the team is a confident unit in the face of the experts picking them to not finish very high this season. The team is defying expectations and this is a way to express that.

Other interesting news regarding the team was that Deb Placey of MSG Network talked during the pregame show about the buzz surrounding Taylor Hall and the Hart Trophy. Hall has certainly been the Devils’ Most Valuable Player. Would the league see things the same way? We will have to stay tuned to find out more as the rest of the season progresses. I will say that barring any serious injury, he should certainly be in the conversation come awards time. He extended his point scoring streak to 17 games with an assist on Nico Hischier’s second goal of the evening.

While the game was a major positive for the Devils, special teams remains a problem for them, specifically the power play. They were 0-for-11 in the last three games and continued that trend tonight, going 0-for-2 officially (although they did scored one just as a power play opportunity ended) with no shots on net tonight. The Hurricanes went 0-for-3 with a total of four shots.

Keith KInkaid was a big part of the Canes being stymied on the power play. He played one of his best games of the season and, in the last two games has been beginning to answer the bell for the Devils. He made 27 saves on 29 shots against. Cory Schneider has not resumed skating this week and no one really seems to know just how long he will be out, so Kinkaid playing better certainly bodes well for New Jersey.

Scott Darling was between the pipes for Carolina and made 17 saves on 22 Devils shots. He looked good, particularly early and it seemed like the Devils had run into another hot goalie. But in the end, the Devils came out ahead.

In terms of the Devils’ roster, Brian Boyle (shoulder) and John Quenneville (knee) remain out of the lineup while defenseman Mirco Mueller was the healhy scratch. Nick Lappin was moved up to the second line right wing with Jesper Bratt and Pavel Zacha.

One other item of note was that Kyle Palmieri was playing in his 200th career NHL game. Congratulations to him on this tremendous milestone.

Carolina got the scoring kicked off when Jeff Skinner scored at 17:20 of the first period. The goal was initially waved off on the ice, with the referee saying that Skinner kicked the puck into the net. Toronto got the final word, however. The replay showed that he actually got his stick on the puck before it crossed the line, but after he kicked it, so the call on the ice was reversed to a good goal. The goal occurred just seconds after the Canes’ first power play of the game had expired, so it was technically an even strength goal. Victor Rask and Justin Williams had the assists on the goal.

So the Devils were down 1-0 with time in the first period seemingly through. But then, with 19 seconds remaining, Damon Severson notched his first of two points on the night when he scored from Nico Hischier. It came when Nico chipped the puck up to Severson, who carried it from the Devils blue line and down the ice on a two-on-two with Bratt. He came to the near faceoff dot in the Canes zone and fired a shot over Darling’s blocker to tie things up at one, using Bratt as a decoy. That one came just after a Hurricanes’ power play had just expired making that an even strength goal as well. Hall (who was serving a delay of game penalty) jumped out of the penalty box and was the trailer on the play.

The Devils would take their first lead of the game 6:48 into the second period when Stefan Noesen scored. Travis Zajac and Miles Wood had the assists on that one and it came when Noesen got the puck deep into the Carolina zone. Wood picked it up in the corner and cycled to Zajac, who directed a shot on net. Darling tried to cover the puck up, but could not. WIth the puck loose in the crease, Noesen was “Johnny on the spot” to put it home, making it 2-1 Devils. It was Noesen’s first goal since December 16 against the Ducks, but it would not be his last of the night.

The Devils had no time to enjoy their new lead, as Brett Pesce tied things up at two less than a minute later for the Canes. Pesce got assists from Jaccob Slavin and Williams as the game was now knotted at two.

But the Devils would take the lead back just before the end of the second period, this time for good. Palmieri scored from Hischier and John Moore at 17:28 to make it 3-2. It happened when Palmieri sent the puck down low to Hischier, who was behind the Canes’ net, and then went right to the goal mouth. Nico fed him with a nice pass that Palmieri did not miss putting home.

Carolina coach Bill Peters would challenge for goaltender interference, charging that Hischier impeded Darling from making the save as Nico was collapsing down towards the crease. The replay confirmed that there was minimal contact and the call on the ice stood. It was a good goal and Carolina lost their timeout as a result of losing the challenge.

The Devils took that lead – and the momentum – into the third period. Just 8:06 into the third, NIco Hischier collected his third point of the night, this time a goal, when he scored from Hall and Keith Kinkaid to double the Devils’ lead to 4-2. It developed when Hall blocked a Canes clearing attempt to Nico. Hischier broke in on a two-on-one with Palmieri and elected to shoot. He beat Darling over the blocker and the Devils lead was now two.

The final goal of the evening was probably the most interesting and impressive to watch. It was scored by Noesen (his second of the night) from Severson (his second point of the night) and came when Severson kept a Darling clearing attempt in the Hurricanes’ zone. He shot and it was redirected by Noesen with the puck bouncing over Darling and into the Carolina net. Wood was in front providing a screen. That made it 5-2 and that was your final.

For their efforts, Hischier would be named the game’s first star while Noesen was the second and Severson the third.

In terms of stats, Andy Greene led the Devils in ice time with 22:24, three players (Zajac, Bratt and Greene) led in shots on goal with three each, Palmieri led in hits with five and Greene led by a wide margin in blocks with five. The Devils won 47-percent of the game’s faceoffs. The team had 17 blocks as a whole, which really allowed them to be successful on the penalty kill and in keeping the Canes off of the scoreboard for most of the night.

Next up, the Devils will head south to Tampa to take on the Lightning on Saturday. The Bolts are one of the top teams in the Atlantic Division and are a tough opponent. The teams last met back in the beginning of the season in November – which the Devils won at home in a shootout. The Devils will need to bring a complete game for this one. Hopefully, they can keep the momentum going.