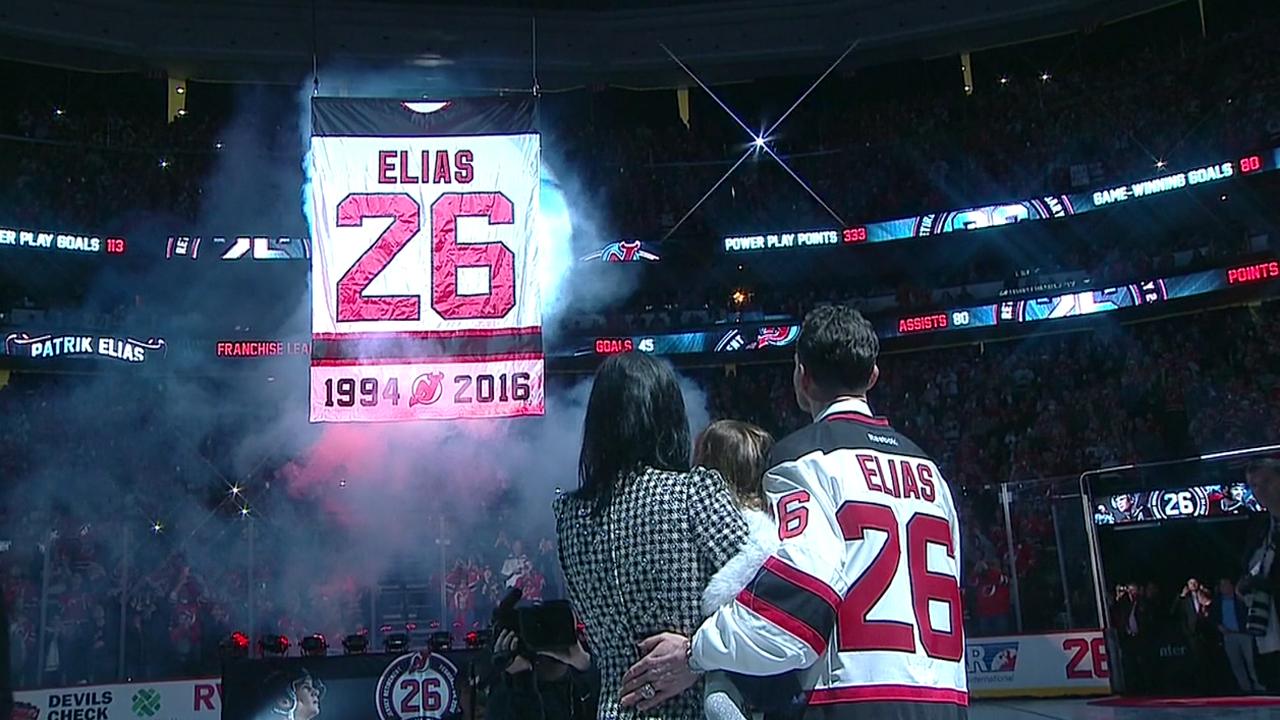 Last night, the Devils honored a legend by retiring the number of their greatest offensive player ever. There were many former players and Devils greats in attendance to help pay homage to the past glories of a great franchise.

But the current team made a big step of their own, getting a big Metro Division win in a tight race in come-from-behind fashion. The Devils defeated the New York Islanders 2-1 off of two goals from Kyle Palmieri. Taylor Hall assisted on both goals to extend his personal point scoring streak to an amazing 21 games total.

First the ceremony. It was very well done by the Devils organization and featured prominent Czech players from Devils history who were also teammates of Elias’ both on the Devils and internationally. Players like Marek Zidlicky, Bobby Holik and his A-Line linemate, Petr Sykora. Among other teammates present were: one of the all-time underrated Devils, Sergei Brylin; Michael Rupp – who won a Cup with Elias in 2003; former Devils goalie Kevin Weekes; former Devils captain turned broadcaster Bryce Salvador and former Devils coach Robbie Ftorek, who also coached Elias with the AHL’s Albany River Rats.

Devils radio play-by-play man Matt Loughlin emceed the event and there were speeches from Stevens (representing past players), Josh Harris and David Blitzer (respresenting management), Daly (representing the NHL) and Travis Zajac (representing the current players – Zajac also spent about ten years as Elias’ teammate and is a close friend of his). There were also taped comments from former Devils general manager Lou Lamoriello (who is currently busy with the trade deadline for the Toronto Maple Leafs). In addition, the fans voiced their approval with chants of “Patty! Patty!” throughout the proceedings.

Highlight videos were shown, of which there are many to choose from for the man who is the franchise’s all-time leading scorer in goals, assists and total points. The main focus of most of the speeches was that Elias was the offensive heartbeat of a team that was known as being very defensive during it’s heyday.

Once the speeches were done, the banner featuring Elias’ number 26 was raised to the rafters of Prudential Center, never to be worn by a Devils player ever again.

Throughout the night, there would be taped segments shown on the big video board featuring fans and former teammates (including Zach Parise, who took the ceremonial faceoff with Andy Greene when Elias dropped the puck last game versus Minnesota) giving their memories and impressions of the career of Patrik Elias the player and the man.

But there was still a game to be played and one that was very important at that.

The Devils had a lot on their plate with the Islanders. But they also had the debut of former-Islander Michael Grabner, acquired from the Rangers on Friday. Roster-wise, he was in at forward while Jimmy Hayes and Mirco Mueller were the scratches.

WIth Cory Schneider still out, Long Island-native Keith Kinkaid got the start against his boyhood team. He made 30 saves on 31 New York shots. He also came up big when he needed to, playing a good game once again. Kinkaid is a solid backup and has largely played very well in his recent time in the spotlight. Against him was Jaroslav Halak for the Isles. He stopped 31 of 33 shots faced.

The game was pretty cleanly played and the officials let a lot go, as evidenced by the three power plays total in the game. The Devils were 0-for-1 with four shots on their man advantage while the Isles were 0-for-2 with a pair of power play shots.

Following a scoreless first period, it was the Islanders who got on the board at 3:55 of the second period. Jordan Eberle scored from Anthony Beauvillier and rookie phenom Mathew Barzal. That made it 1-0 New York and it would stay that way through the second intermission.

It seemed we were headed for a defensive struggle, possibly one the Devils would lose until an inspired Kyle Palmieri basically took over the game. He tied it up at 6:35 of the third period off assists from Hall and Nico Hischier. It came when Hischier made a nice defensive play in the Devils’ end to chip the puck up to Hall along the far boards. Hall gave it to a streaking Palmieri who skated up the left wing. He pulled the puck by an Islander defender just inside the New York blue line and fired at the top of the faceoff circle, beating Halak glove side to tie things up at one.

It was a nice goal and one that almost caught the crowd by surprise, he snapped the shot off so fast. With the assist on that goal, Hall extended his point streak to 14 games straight and 21 total.

But the Palmieri/Hall show was not over. Palmieri notched the game winner at the 11:11 mark of the third period. He got assists from Sami Vatanen and Hall. It occurred when Hischier won a board battle behind the Islander net and kicked the puck over to Hall in the far corner. Hall, who is having his number retired by the Windsor Spitfires on Sunday, wound the puck around the boards to Vatanen at the near point. Vatanen fired on net and Palmieri, camped in front of the net, tipped it by Halak to make it 2-1 Devils.

And that is where it would stand. The Isles would pull Halak with about 1:30 left in the game, but the Devils weathered the storm and pulled out the victory. Kinkaid would be named the game’s third star, Hall the second and Palmieri the first. Both of Hall’s assist announcements were met with chants of “MVP! MVP!” from a crowd hoping the NHL rewards Taylor’s heart with Hart this summer.

Vatanen led the team in ice time with 23:09, Palmieri led in shots on goal by a wide margin with eight, Brian Boyle and Andy Greene each led in hits, throwing four of them, Greene also led in blocks with three and Blake Coleman (who switched his jersey number to 20 with Grabner taking number 40) led in takeaways with two. The Devils won 47-percent of the game’s faceoffs.

Grabner played well in his debut, firing two shots on net with an even plus/minus rating and a takeaway. He did that in 13:34 of ice time (1:53 of which was on the penalty kill).

Next up, the Devils will face another stiff divisional test as they head to Pittsburgh on Tuesday to take on the Penguins. Hopefully they can carry over the momentum of a hard-fought, emotional win on what was a very emotional night.

Note: the photo of Patrik Elias’ retired number banner at the top of this post was downloaded from 24-hours-news.com.