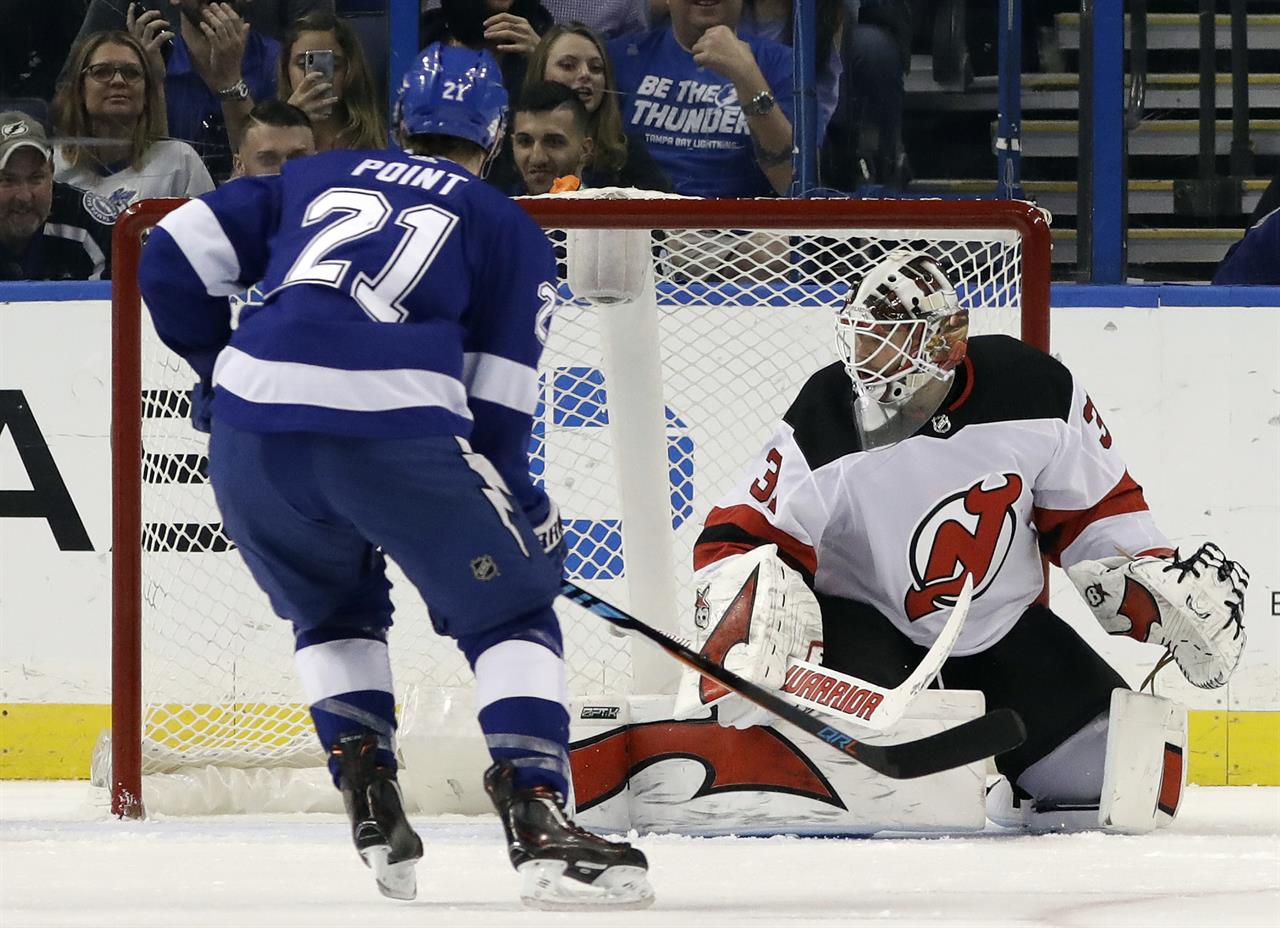 While it snows here in New Jersey, the Devils traveled to warm, sunny Florida to take on the NHL-best Tampa Bay Lightning in their only trip to Tampa this season. The Devils were able to hang on for a 4-3 victory that was as big a win as they have had all season.

The Devils sort of have the Bolts’ number this year, beating them in their other meeting, way back on October 17 in Newark, in a shootout. In the time since, the Lightning have had their way with the rest of the league, currently leading in the President’s Trophy race for the best overall record in the NHL. But this was the Devils’, or more specifically, Eddie Lack’s, night.

The Devils goaltender turned away a career high 48 shots as the Lightning blasted 51 on his net. Lack got the start primarily because the Devils play in Carolina tomorrow afternoon at 5 PM, a 22 hour turnaround between tonight and tomorrow. With that little time between games, you do not want to go with Keith Kinkaid for both. He also notched his first win as a Devil and first overall since November 13, when he was with Calgary. Lack would be named the game’s first star.

Opposing him was Tampa’s Andrei Vasilevskiy. He stopped 24 of 28 Devils shots. Less of a workload and the Devils were able to break through with goals when they needed to.

Some roster news for the Devils as John Quenneville has been placed on injured reserve retroactive to February 10. He is out with the knee injury. The Devils called up Blake Pietila from Binghamton, but he did not play as a healthy scratch. Brian Boyle remained a scratch with his shoulder injury. He may return to the lineup as soon as tomorrow’s game in Raleigh. Mirco Mueller was the other healthy scratch.

The Devils needed to stay out of the penalty box against a high powered offense like Tampa has, but were not successful on that front. Coach John Hynes said repeatedly in his postgame press conference that they did not stay disciplined, saying that he “was disappointed in their penalty discipline.” Tampa ended up 2-for-6 on the power play, getting a whopping 15 power play shots through to Lack. The Devils were 0-for-3 with four shots on goal. The Devils did a good job on the penalty kill, blocking shots and getting sticks in lanes. When that failed, Lack was phenomenal and helped the Devils cause as much as he could.

The Devils got on the board first, at 2:59 of the first period when Ben Lovejoy scored unassisted. It came when Lovejoy took a Lightning clearing attempt along the half wall and threw it on net. The puck squibbed by Vasilevskiy to make it 1-0 Devils. Lovejoy told Deb Placey during a first intermission interview that the players have been instructed to just get the puck on net when they were along the wall like that and he did so. He had a little bit of luck on his side however, as the puck had eyes and found its way into the back of the net.

Another former Pittsburgh Penguin would tie the game up for Tampa. Chris Kunitz, like Lovejoy he played for years with the Pens, winning three Stanley Cups there, took a perfect backhanded pass from Ryan Callahan at 12:41 and fired a nice shot that beat Lack to make it 1-1. That is where we would be come the first intermission. A good start for the Devils as they got out of the first period tied with a very good team.

But that good team would be given too many chances to score as the Devils beat a path to the penalty box. Early in the second, Sami Vatanen was called for holding Brayden Point. The Bolts would score with just seven seconds left on the power play. Point scored on a rebound as he crashed the net at 2:47 to put Tampa up 2-1. Yanni Gourde and Mikhail Sergachev had the assists.

The Devils, however, would not be deterred. Just 26 seconds after the Point goal, Nico Hischier would score to tie things up at two. It happened when Vatanen got the puck out of the Devils’ zone and to Taylor Hall. Hall made a nice move around a Tampa defender, jumping up with Hischier on a two-on-one. Hischier elected to shoot (something the coaches have been asking him to do more of) on the ensuing odd man rush, and beat Vasilevskiy stick side to tie the game up. Vatanen and Hall had the assists, extending Hall’s consecutive points streak to 17 games total and ten officially – the NHL counting the games that he missed with an injury in between the first seven game streak and this new streak against him.

Nico’s goal was also set up by a nice defensive play by Will Butcher, as he stood the Lightning up at the Devils blue line as they broke in on a two-on-one to give the Devils possession of the puck in the first place.

At 4:54, the Devils would again find themselves in penalty trouble. Miles Wood hit a vulnerable Vladislav Namestnikov and got a boarding call out of it. Andrej Sustr took exception and the two started jostling, leading to matching roughing calls for Wood and Sustr. With the initial boarding call, though, New Jersey was going on the PK.

But things would work out for them. At 6:27, Pavel Zacha put in a shorthanded goal from Vatanen and Lovejoy to give the Devils the 3-2 lead. It happened when the Devils caught Tampa in a bad line change after circling the puck back to center to buy time. Vatanen hit Zacha with a nice pass through the neutral zone and he and Blake Coleman broke in on a two-on-one. Zacha took the shot himself, beating Vasilevskiy to the stick side to regain the lead for the Devils.

The Devils killed off the rest of the penalty and things seemed to really be going their way. An “oh boy” moment occurred when Hall seemed to score midway through the second period. The red light came on briefly but the goal was immediately waved off by the on-ice officials. Replay did show that the shot bounced off of Tampa’s Anton Stralman and off the far post, never crossing the goal line. It was the correct call, even if a little bit disappointing for Devils fans.

The Devils got out of the second with the lead and things were beginning to point in the direction that they could actually pull this off. Things looked even more like that when Wood scored just 1:24 into the third frame. That one came when Vasilevskiy made two great saves, the second a nice reaction save on Travis Zajac in front. The puck was directed to the near corner, where Stefan Noesen won a puck battle to gain control. He centered to Wood in the slot. Wood beat Vasilevskiy as the goalie was moving side-to-side to square up to his shot. That made it 4-2 Devils and seemed to ice the game for New Jersey.

But against a team like the Bolts, that is never true. Especially when the Devils are taking as many penalties as they did in this game. With Kyle Palmieri in the box for tripping, it only took 12 seconds for the Lightning power play to notch one. Steven Stamkos (who drew the penalty) scored from Victor Hedman and Nikita Kucherov 5:15 into the third period. That would set up a dramatic finish.

With Tampa down by one, coach Jon Cooper would pull Vasilevskiy with just under two minutes left in the game. With the Bolts with the extra skater, it was a shooting gallery on Lack. But he came through, making the big saves when he was most needed and preserving the Devils’ 4-3 win.

Stats-wise, Vatanen led in ice time with 25:25. Wood led in shots on goal by a wide margin with six, doubling up Zajac and Noesen, who had the second most with three each. Noesen did lead in hits with three while Andy Greene led in blocked shots with four. Hischier was the leader in takeaways with three while the Devils won 53-percent of their faceoffs, a feat without Boyle – one of their strongest faceoff guys.

So don’t look now, but the Devils have won three in a row and are creating some breathing room for themselves in the wildcard race. Next up they have a big showdown with the Hurricanes again tomorrow with the puck drop at 5 PM. Carolina has lost two straight (the Devils game and then the following night against the Islanders). Hopefully the Devils can keep up the momentum and this early start will play into their hands.

As always, if you enjoyed this post, please follow us on Twitter @LGDevilsNet, email us (the email can be found in the “About” section on the main page), or simply leave a comment below. All photos in this article credited to Chris O’Meara/Associated Press.